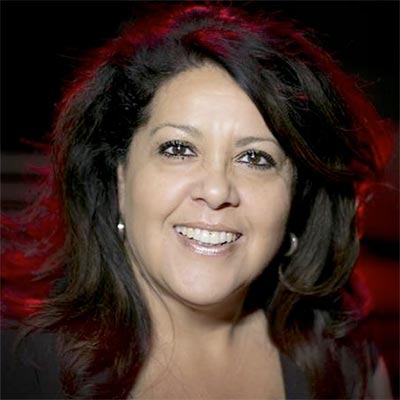 Ms. Lina Ramos a native New Mexican is an arts educator, director, conductor, opera singer and performer. Ms. Ramos has served as an educator for over 30 years, where she has had such remarkable teaching experiences in locations such as the inner-city schools of Washington D.C. to rural schools in New Mexico. In service to the community, Ms. Ramos feels fortunate to have conducted and directed over 30 shows for the musical theatre community, various churches and schools. Ms. Ramos also has served as Music Director and has been on the board of the New Mexico High School Musical Theatre Awards since 2015. Also, currently Ms. Ramos serves on the Bernalillo County Arts board and represents District 3.

Ms. Ramos continues to teach the performing arts such as drama, choir and voice in numerous settings, such as her recent work with the Santa Fe Opera Alto Program. As a performer and singer Ms. Ramos continues to perform all genres of singing as her recent appearance as Dona Rosa in Opera Southwest’s production of Il Postino and in various jazz concerts. Ms. Ramos currently teaches theatre, choir and IB Theatre at Cottonwood Classical Preparatory School and thoroughly enjoys working with the amazing CCPS students. Ms. Ramos is also of Cuban heritage and loves to dance salsa and other passions include cooking and songwriting.