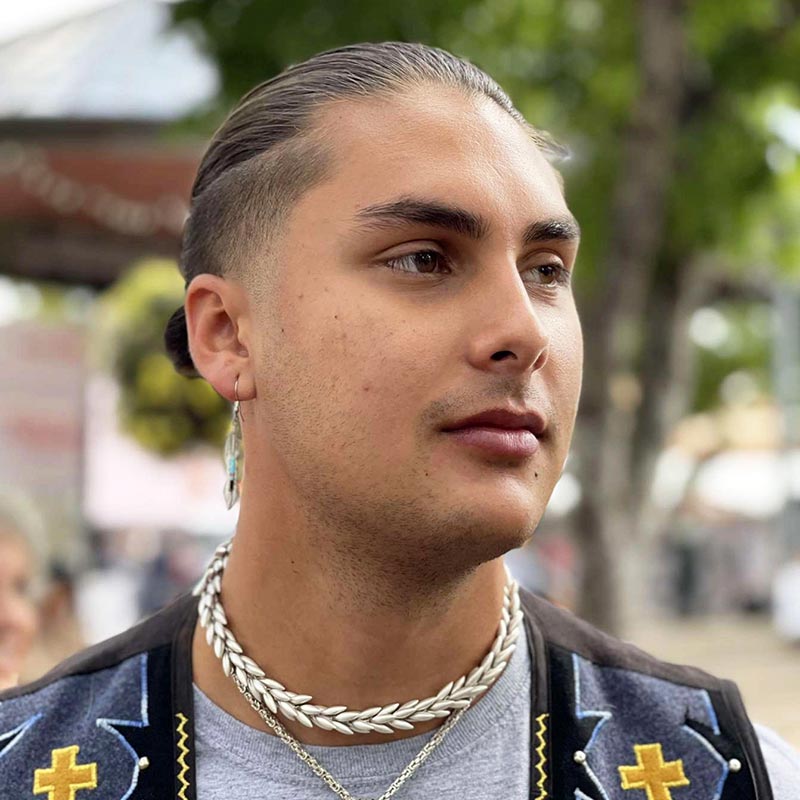 If you live near Santa Fe, or even in the Southwest, there’s a good chance you’ve experienced the multi-faced talents of 23-year-old Edwin Felter. He sings, in a gorgeous voice. He dances with fluidity and grace: jazz, tap and, perhaps most importantly, traditional Native American hoop dance. He’s a scholar, with a Bachelor of Arts degree in engineering. He’s also deeply committed to his heritage as an instructor of Tewa, the ancestral language of Nambe Pueblo, where Felter was born and where he still lives. And last but certainly not least, Felter is an NDI New Mexico alumnus.

Like so many New Mexico school children, Felter’s NDI New Mexico experience began when he was in fourth grade and participated in its weekly dance session in his elementary school gymnasium. Instructors noticed his inherent talent and enthusiasm, and suggested he join the after-school SWAT team.

“I always loved acting, singing and dancing,” Felter said. “It made me feel free.” While he learned an array of dance styles, Felter said he always particularly loved tap. “Tap puts your feet to work – it probably has more footwork than any other dance form except ballet,” he said. “And when you put a kid in tap shoes, they realize they can make music with their feet. It’s so much fun.”

However, Felter’s inherent energy and joy was abruptly halted when his father died unexpectedly. Felter, still in elementary school, was left deeply traumatized. “I was depressed and in a really bad place,” he said. “I had been a social butterfly, confident and motivated. I lost all of that when my father died.”

Felter said the trauma left him uncomfortable in school and reluctant to continue with NDI New Mexico. “But my mom pushed me to return to my dance classes,” he said. “She felt it would help me rediscover who I was and learn how to mourn your losses but also to keep moving forward.”

And it worked. “Going back helped me overcome the emotional obstacles I was facing. And being with the instructors and the other kids helped me regain my attachments to people.”

Felter left NDI New Mexico after 6th grade to pursue other activities that enabled him to explore his other talents and his passions. “That’s something else NDI New Mexico instructors gave me: the mind-set of never staying complacent and to learn new things. They gave me wings and I flew.”

“I am a traditional native man,” Felter said. “I grew up around the reservation and I was always involved with traditional dance and music.” The organization, aware of his myriad creative talents, asked Felter to join as its lead singer. “They also taught me hoop dancing and now I teach young children the basics,” he said.

The tradition of hoop dancing is vital, Felter added, because “it honors all living things present on mother earth and represents humans living in harmony together.”

“One’s native language is essential to one’s purpose as a Native American,” he said. “If you can speak your language, you can fully participate in your traditions and your culture.”

Despite everything he’s already accomplished, Felter said he’s always looking for ways to contribute to his community, build on his talents and broaden his horizons. “I feel like a human Swiss Army Knife,” he said with a laugh. “Lots of tools, lots of possibilities. NDI-NM helped me become that.”