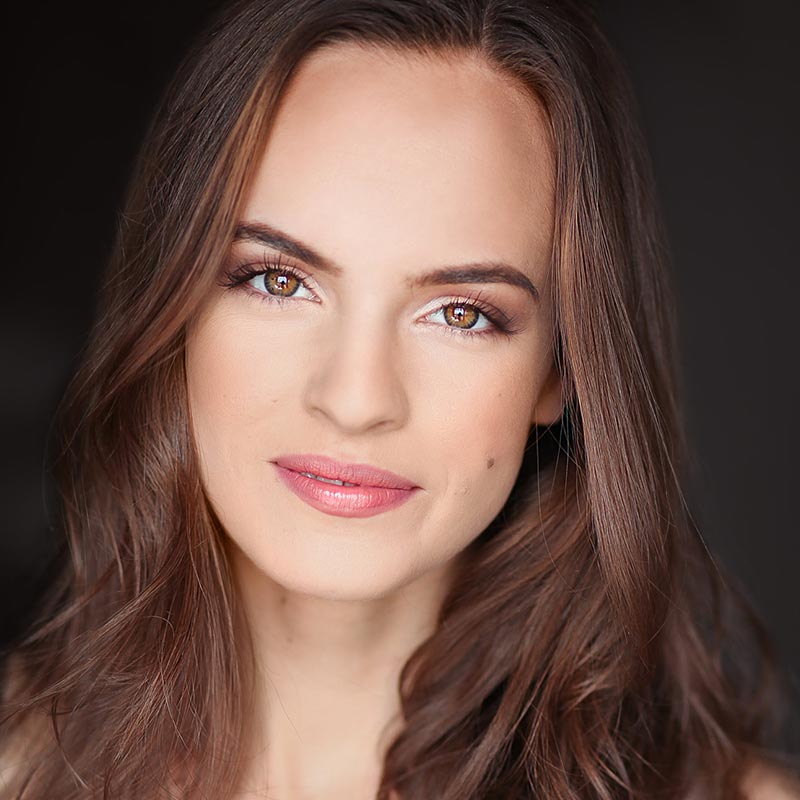 Gabriella Ottersberg Enriquez remembers the precise moment she realized she wanted to be an artist. Her older brother Stewart was dancing onstage for hundreds of people in NDI New Mexico’s annual extravaganza. Gabriella (“Gaby” to her friends and family) took in the lights, the music, and the unique energy that comes from a creative spectacle performed for a rapt audience.

I saw that, and I remember feeling a glow in my heart that I had never felt before. I wanted to be on that stage and be part of that community.I wanted to learn everything.

Gaby had already been participating NDI New Mexico’s In-School Outreach program, which included weekly dance and exercise sessions at the elementary school where she, Stewart, and their younger brother Nicholas attended. However, the magic of that particular evening prompted her to double down on her effort in the hopes of being asked to join NDI New Mexico’s Super Wonderful Advanced Team (SWAT), which is designed for children who excel in the outreach program and who show a particular motivation and enthusiasm for dance. Her efforts worked. NDI New Mexico Executive Director Russell Baker, who at that time was a SWAT instructor, invited Gaby to join. “I agreed immediately. It was the biggest honor of my life,” she says.

Gaby was a precocious 10-year-old: smart, independent, ambitious, and maybe a little stubborn. She’s 24 now, with a college degree and a professional resume that includes roles in theatrical performances such as Jerome Robbins’ Broadway and A Chorus Line. She sings and is a TV actress, having landed an appearance on the network series Law and Order. She has an agent, is pursuing TV and film auditions and, what else?

“Oh yes, I’m taking Flamenco lessons. I want to be a lifelong learner,” she says.

The path from enthusiastic fourth grader to successful working artist is one of innate talent, hard work, and a lot of lessons. However, Gaby is the first to note that the most important lessons she learned as an NDI New Mexico performer are perhaps not the most obvious ones. And she credits a significant amount of her success, confidence, and sense of self to the fact that at NDI New Mexico she was surrounded by adults who cared about her and were willing to impart those lessons whenever they were necessary.

“The fact that I was presented with certain choices and was taught certain life lessons when I was younger, as opposed to facing them for the first time as an adult, has made a huge difference for me”

Gaby tells the story of when her motivation shifted from wanting people to see her perform, to the more private – and in many ways more difficult – motivation of performance as an avenue for personal growth. That lesson was taught by none other than NDI New Mexico founder Catherine Oppenheimer.

Gaby laughs. “I was in middle school and thought I was working so hard, going to class, doing homework, and then rehearsing three hours a day. But some days I was just lazy. I’d just go through the motions in rehearsal, or even hide in the locker room. One day Catherine found me in the locker room and asked me, ’What are you doing?’ I made up some lame story and Catherine just sighed. And then she told me I would not be rehearsing again until I had thought seriously about my potential and made a decision about whether or not I was willing to really do the hard work.”

Gaby stewed about it for more than a week. “I was definitely prideful,” she says. “But I went home and thought hard about what Catherine had said. I thought about the kind of person I wanted to be, if I even wanted to be an artist or performer at all, and whether I was cut out for it. I decided that yes, I wanted to be the kind of person who worked as hard as she could, and who also worked with as much honesty and integrity as possible.”

She called Catherine and told her she was ready to dance.

“Catherine didn’t need an explanation. She just said, ’See you at rehearsal at 4 p.m.’”

Artists rehearse so they can embody the character they play, achieving a transparency that allows the audience to be fully absorbed by the story unfolding onstage. But between the rehearsals and the performances are the infamous auditions. “If you’re on the path to becoming a professional performer, a big part of the challenge is getting into the room,” Gaby says. NDI New Mexico helped her forge relationships with influential performers who could and did help her get into auditions.

That, she says, has been perhaps the most important lesson she has taken from NDI New Mexico. Time and again she has been encouraged, and when necessary, pushed to look beyond dancing, singing, and performing, and instead look inward to answer some hard questions: How can I be a better person? What’s important to me? What makes me happy? What are my responsibilities to the people I care about?”
“I really took those lessons to heart, and I’ve kept working hard and waiting for the right opportunities with people I really connected with,” Gaby says.

And it’s worked. It is, she said, a key reason she landed the theatrical roles, is busy with her TV and film auditions, and despite a major role in the national tour of Tootsie falling through because of the pandemic, she intends to eventually go to Los Angeles for TV work, then back to New York City to pick up where she left off in theater. She’s intent on mastering Flamenco and then who knows what else is next?

“Throughout my time at NDI New Mexico, the one thing I heard over and over again was, ’you can do it.’”